In order to consider course choice changes for session 22-23 you must book a meeting with Mr Fleming.

Pupils from Bathgate Academy will be involved in a Polar Academy expedition to Northern Greenland in April 2019. To get more information or make a donation please see below or click the Just Giving link. 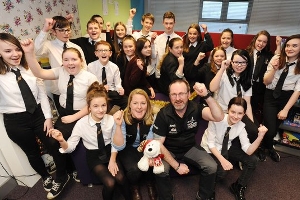 20 pupils from Bathgate Academy are preparing for 15 months of extensive training with 10 ultimately being chosen by the Bo'ness based Charity, the Polar Academy to go on expedition to Arctic Greenland in March 2019.

The 15 girls and 5 boys (all currently in S2 or S3) face 15 months of tough training with The Polar Academy to ensure all are physically and mentally equipped for the 10-day, 100km expedition in Eastern Greenland. In the Arctic, each youth will haul his or her own 45kg sledge, navigate, camp on the sea-ice and undertake scientific experiments in support of the Scottish school curriculum.

The pupils are the fifth expedition team to be annually selected by the self-funded charity that aims to inspire youth through exploration. Craig Mathieson established The Polar Academy in 2014, determined to help positively transform the lives of young people he describes as 'invisible' at school and sometimes devoid of self-confidence, direction and self-esteem. To date, thirty youths from schools in North Lanarkshire and Edinburgh and with similar personal issues have seen their lives transformed by the work of the charity. 10 pupils from Lochgelly High will go in March 2018.

Significantly, over 50,000 pupils across Scotland have also heard first-hand accounts of The Polar Academy experience from former participants. Following their return to Scotland from Greenland, all participants must address school assemblies with the aim of inspiring their peer groups to overcome personal challenges and to pursue their own goals.

The Polar Academy is wholly self-funded and does not ask pupils to pay for their participation. With the generous support of companies and private donors, it must annually fundraiser over £170,000 to operate. Chris Tiso, CEO of Tiso the outdoor adventure retail specialist, is a founding partner of the charity. Reflecting on the selection of The Polar Academy's fifth intake of participants, Chris Tiso commented:

"Over the past three years I have personally witnessed the remarkable change in the young people who have had the opportunity to experience The Polar Academy. I have no doubt that the pupils from Bathgate Academy will return from Greenland with greater self-confidence and self-esteem, ready to be role models in their local community. These are ordinary youths who can - and will - achieve the extraordinary. All at Tiso Group wish them well."

In addition to considerable support from founding partners Tiso Group and Bergans of Norway, the charity is also helped by the likes of Cornhill Building Services, Baillie Gifford and by private donations.

Bathgate Academy would be delighted to hear from any businesses within West Lothian who would like to support or hear more about this venture. Please phone the school on 01506 653725.